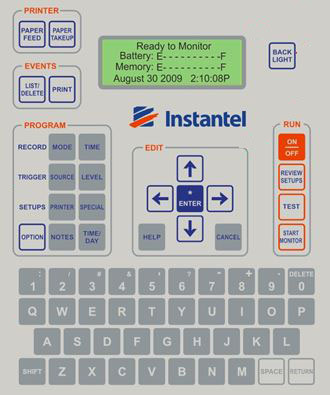 2) After confirming the Blastmate III console is operational, turn it off. If your have entered a menu, press the Cancel key to return to the Main window. Press On/Off key until the display disappears. The Blastmate III is now turned off.

4) Turn on the Blastmate III by pushing On/Off key until you hear a beep. Check your installation by running the Sensorcheck program. Before pushing the Test button, make sure the triaxial geophone is level and not upside down. The holes for the threaded spikes are on the bottom of the geophone. A large arrow is embossed in to the top of the geophone case. Press the Test button. This button tests the functionality of the transducer and microphone. It is important not to touch the Blastmate III when this function is being performed. The Sensorcheck program will let you know if all channels are working, if the microphone is On/Off, and if the Unit is Ok. If in doubt about the current settings, a good place to start is resetting the Blastmate III to its defaults.

5) Review all the Blastmate III preferences by pressing the Review Setups keys at the same time. The Blastmate III display will scroll through all of the current setups: record mode, trigger source, trigger levels, record stop mode, the time, and the date. Push the Enter key at anytime to pause and view the setups. To continue scrolling, press the Enter key again.

6) Change the Blastmate III preferences as needed. A common preference to change is the units setting, changed from Metric to Imperial.

7) Turn the Blastmate III off and install at a desired location for testing or to start monitoring.

9) View the events recorded. From the Main window, press the List/Delete key to display the View Events window. Next use the Press the Enter key to view the most recently recorded event. Next, press the ↑ or ↓ key to view the other event we recorded caused by clapping our hands in front of the microphone. After testing it may be a good idea to reset the console to its default settings.

10) Turn off the Blastmate III. Press the Cancel key to return to the Main window. Push the On/Off key until the displays disappears. The Blastmate III is now turned off.